One of the most intriguing aspects of fine-scale miniatures is the secondary spaces that can be glimpsed through those tiny windows and doors. Tantalizing hints of what lies beyond the primary room setting engage our sense of mystery and imagination.

One can gain a deeper understanding of the artists’ interpretive decisions by examining the secondary spaces in their work. From the perspective of the room, to the lighting, to the dimensionality, each artist handles these details with their own special twist. I’ve highlighted three room settings with secondary spaces that are especially intricate.

Art Deco Jewelry Store
Viewers are often so dazzled by the stunning interior of the Art Deco Jewelry Store that they don’t consciously notice the details beyond the silvered-plated doors. Based on the SS Normandie, Niemen Marcus in Chicago, and the Cincinnati Netherland Hotel, the elegant, two-story room is a multilayered masterpiece. The walls are clad in rosewood paneling, and the floor, columns, and baseboards feature six different types of faux-painted marble. The work was commissioned from English fine-scale architectural artists Susie Rogers and Kevin Mulvany. Lori Ann Potts of Canada created the glittering Art Deco jewelry, and María José Santos of Spain made the stylish trio of 1920s figures. 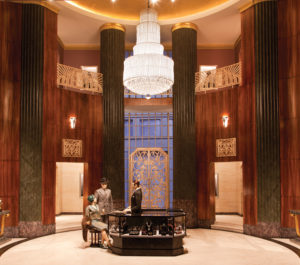 The building façade “across the street” from the Art Deco Jewelry Store is visible in this photo.

When Barbara Marshall commissioned the room setting, she identified a specific location for its display in the Miniature Maze. The narrow dimensions challenged Mulvany and Rogers to communicate grandeur in a very compact space. They designed a circular sales floor that is mirrored by a gilded, elliptical ceiling. A screened-off lobby and balcony provide a feast for the eyes with bejeweled niches, hand-engraved elevator doors, and elevator car interiors based on the Empire State Building.

Mulvany and Rogers chose dusk for the lighting because it is “a magical time of day representing the change from light to dark. It is the time when the interior becomes more important than the exterior; a time for rooms to glitter and glow.” They created a building façade to sit “across the street” from the store in faux gray stone with multiple windows. Once all the parts of the work of art arrived in Kansas City, artist William R. Robertson designed the lighting system and added the glowing street lamps and blue Packard Sedan model for additional depth and detail. 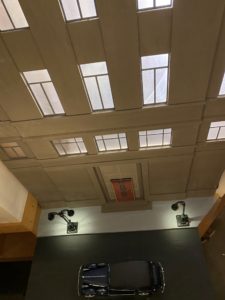 Tudor Bedroom
T/m’s collection includes three room settings by Kansas City artist Thomas Warner (1924-1992). All three works have secondary spaces, but Warner chose to handle them each differently. The first, the paneled Colonial Dining Room, has a pair of doors that lead to an entrance hall with an exterior door, a niche bookcase, and a newel post that hints at a second floor. The second, the Belter Parlor, was created with his wife Gloria, and has a simple pictorial treatment of farm fields and trees that can be seen beyond the open front door and the lacy-curtained windows on the back wall.

The third, and most fascinating, is the Tudor Bedroom, circa 1580. Like the Art Deco Jewelry Store, the interior of the chamber is impressive with complexly-carved paneling, a heavily-curtained bed, a prie-dieu for private devotions, elaborate textiles, and an embroidery frame that is placed near the recessed window to catch the light. 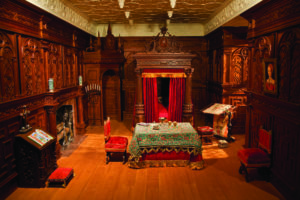 The arched windows are set with wavy panes of glass that distort the view of the outdoors. Nonetheless, Warner designed the detailed façade of a medieval stone building which sits diagonally in the wall next to the room box.  Despite the fact that the viewer must stand to the far left in order to peer through the window, the artist went to great lengths to extend the illusion of reality. 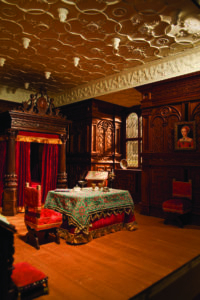 The stone building façade is only visible beyond the window in the alcove of the room. 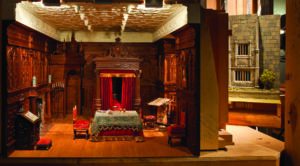 This behind-the-scenes shot reveals the relationship between the room setting and the façade.

Tom Warner started the room setting in 1987, but sadly, he passed away before its completion. His friend and fellow artist, William R. Robertson, finished the Tudor Bedroom to Warner’s specifications in 1996.

Charles Larsson Studio
One of the most detailed secondary spaces is part of the Charles Larsson Studio, circa 1894-1897 in the Miniature Maze. Miniaturist Noral Olson (1921-2015) first mentioned the idea of doing a room from the artist’s home in Sundborg, Sweden, to Barbara Marshall in a letter dated December 1991. The home, called Lilla Hyttnäs, was well-documented in Larsson’s iconic paintings. Marshall, a fan of Larsson, liked the idea, and Olson eventually submitted a proposal to create the home’s drawing room in 1993.

However, Marshall felt that this would not be the best representation of Larsson as an artist. She pressed Olson to consider the studio/workshop next to the drawing room. Olson confessed that he had originally wanted to do this room but was stymied by some of the logistics of the space. Marshall responded by commissioning the studio AND the drawing room, challenging him to find a way to display both rooms.

Olson’s solution did not disappoint! The primary room—the studio/workshop—is presented to the viewer as a “slice” with a floor plan that is wider at one end than the other.  Additionally, the work sits in an angled wall in the Miniature Maze. This allows the viewer a better perspective on the secondary space which can only be viewed through a window on the far wall. It is a fully-furnished room despite the fact that it can only be seen through the tiny opening. 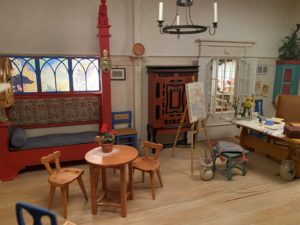 The Drawing Room is visible through the interior window in Carl Larsson’s Studio.

Most ingenious is the utilization of a mirror on the back wall of the drawing room. Looking across the studio, through the window, and into the mirror, the viewer can see the furniture on the opposite wall! 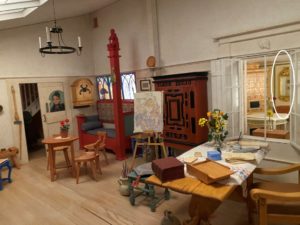 Through the interior window, the beautifully-tiled fireplace and the gold-framed mirror is visible. 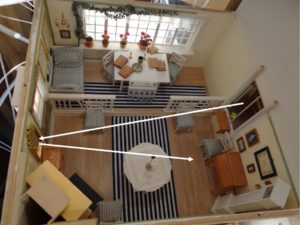 Overhead view of the drawing room behind Carl Larsson’s Studio. The window on the right is the viewing point for the room. The gold mirror on the left allows the viewer to see the clock, desk, chair, and wall decoration on the opposite wall. 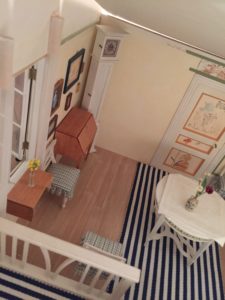 Interior view of the drawing room behind Carl Larsson’s Studio. This wall would not be visible without the use of a mirror.

An additional bonus is another secondary space—on the wide end of the studio, the door is open to reveal the hallway and staircase to the second floor. 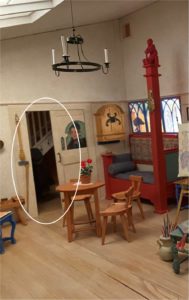 Through the double doors, viewers catch a glimpse of the hall and stairs.

I hope you’ve enjoyed this behind-the-scenes look at these special secondary spaces, and you will take the time to search for them (and others!) when next you visit T/m.

We continue to collect information about artists for our digital files on the fine-scale miniature art movement. If you have any biographical information, photos, or anecdotes you would like to share about Noral Olson or Thomas Warner, please e-mail info@toyandminiaturemuseum.org.