Did you ever wonder how T/m has built such an amazing collection of fine-scale miniatures? Barbara Marshall, the museum’s co-founder started collecting miniatures in the 1950s with a 1:12 scale rocking chair made by Eric Pearson. In the 1970s, Mrs. Marshall got involved with the contemporary fine-scale miniature movement and developed a reputation for being a generous patron with an eye for great art. Many miniature artists talk about how Mrs. Marshall would ask them what they had always dreamed of making, then commission them to do just that.

Barbara Marshall continued to develop the collection by attending the largest and most well-regarded miniature show in the country, Chicago International. Museum staff members remember Mrs. Marshall returning from her annual trips to Chicago with a couple of shopping bags full of exquisite miniatures.

Mrs. Marshall retired from the museum in 2010, and the museum staff took a hiatus from collecting miniatures to focus on a major renovation.  That changed in 2017 when T/m hosted Miniature Masterworks, a juried showcase and sale. Sixty-seven artists came to Kansas City from around the world to participate, and many of them entered the competition for the Barbara Marshall Award for Artistic Achievement. With its incredible success in bringing artists and collectors together, T/m recently announced the next Miniature Masterworks, scheduled for September 17-19, 2021.

T/m curators Amy McKune and Laura Taylor selected a small number of artworks to purchase during Miniature Masterworks 2017, then scheduled a trip to the Chicago International Show in April 2018. Laura had attended the show twice before, most recently in 2011, but the 2018 show was the first for Amy. We knew many of the exhibiting artists from their participation in Miniature Masterworks.

Before leaving for Chicago, we identified some collecting goals. We wanted to acquire new work by artists already represented in the collection to exemplify how their work has evolved since 2010. We also wanted to discover new artists whose work meets Mrs. Marshall’s exacting standards. While we did not have the resources to return with two shopping bags full of objects, we did have the funds to make a few strategic purchases, some of which are featured in this post. There is also a new case in the miniature gallery to highlight new acquisitions, including some of those purchased in 2017 and 2018.

Next month, we’ll once again be attending Chicago International. Stay tuned for a post later this year that will highlight our 2019 purchases. 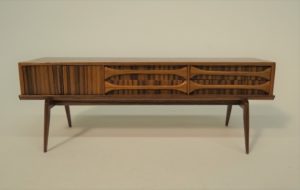 This 6-3/4” x 2-1/4” lowboard by Spanish artist Fernando Setien is based on a 1959 Paola Lowboard by Belgian furniture designer Oswald Vermaercke. The lowboard is named for Paola who married the Prince of Liege in 1959. She became the queen of Belgium when her husband, King Albert II, ascended to the throne in 1993. Setien has been creating fine-scale miniatures for only a few years, but his work displays a great deal of sophistication and artistry.

With the financial support of our dedicated volunteers, T/m purchased this 3-15/16″ x 11-15/16″ aquarium made by Miyuki Kobayashi (Japanese). Kobayashi molds the aquatic life out of clay, then positions them in poured resin. The colorful fish appear to be swimming in water, just as they do in a full-scale aquarium. 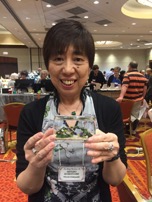 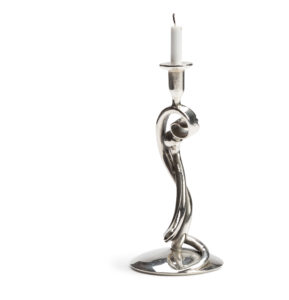 Barbara Marshall has been purchasing exquisite silver and gold pieces from Jens Torp (Danish, working in England) since 1995. This 1-13/16” high candlestick features the artist’s own design, which he created during a master class he was teaching at Miniature I Tune (www.miniatureintune.com), an international summer school in Greve, Denmark.

Since 1981, Jane Graber (American) has worked full-time creating fine-scale miniatures, and Mrs. Marshall has been her patron almost from the start. Many of the artworks by Graber in T/m’s collection are redware and stoneware. She only recently began working in the Arts and Crafts style of these three 3/4” tall daffodil vases.