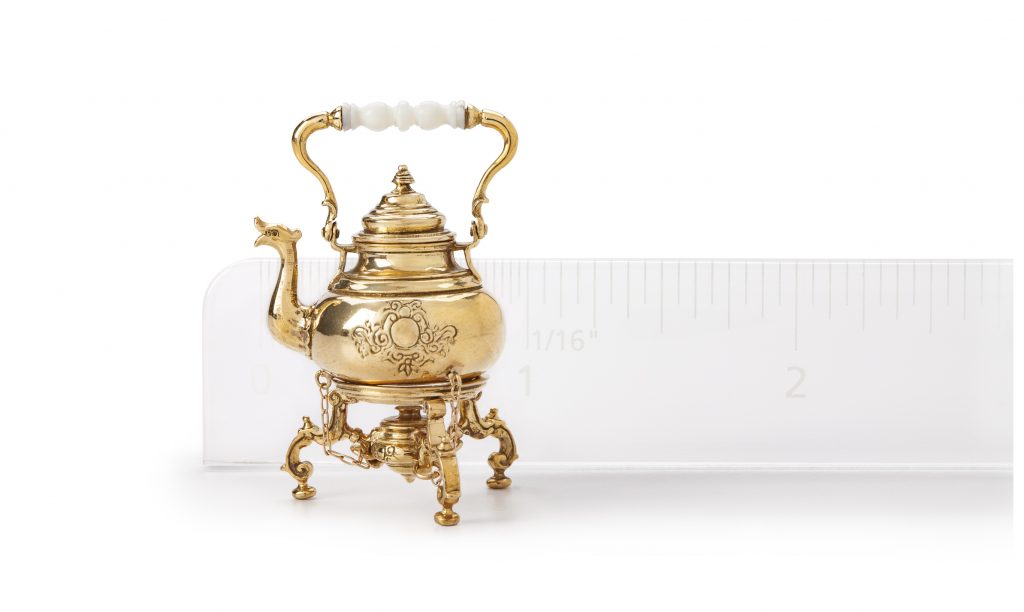 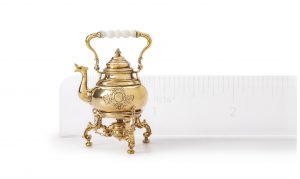 By Laura Taylor, Curator of Interpretation

In one of the largest cities in the world, Obadiah Fisher (1941-2005) made a name for himself by creating tiny art. Working in his studio loft in the shadow of the Manhattan Bridge, the transplanted Brooklynite produced the Obadiah Collection, a catalog of historic silver and gold pieces in fine-scale, paying homage to the great silversmiths of the 17th and 18th centuries. 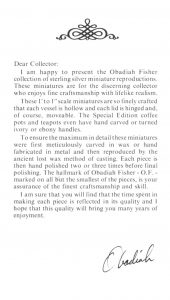 Originally from Cleveland, Ohio, Obadiah Fisher came to the Big Apple as an accomplished sculptor and jewelry maker in 1966. He found work in the city’s commercial jewelry industry in both manufacturing and design but eventually left to pursue freelance opportunities. The Metropolitan Museum of Art commissioned him to produce models of Egyptian jewelry for the blockbuster exhibition Treasures of Tutankhamun (King Tut), and he worked with both the Brooklyn Museum and the Philadelphia Museum of Art on reproducing Egyptian and Peruvian jewelry.

In the late 1970s, a studio visit from Elisabett Andrews would change the course of Fisher’s career. Andrews, a fine-scale porcelain artist, was there to view his custom-designed jewelry and suggested that he try making fine-scale silver miniatures. Intrigued, Fisher selected some full-scale works to reproduce in 1:12 scale. His first works were sold by famed dollhouse expert Flora Gill Jacobs in the gift shop of her Washington Toy and Dollhouse Museum (in the District of Columbia). 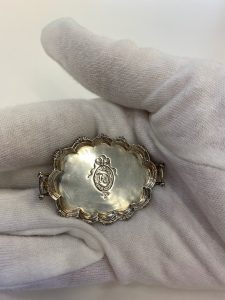 Fisher became hooked and amassed a library of books and magazines featuring historic designs for research. He always started by making a pencil sketch and determining what details made up the essence of the piece. Employing the lost wax casting process, he carved a wax model of the piece and then created a rubber mold, allowing for 10% shrinkage. A commercial company cast the miniatures, and Fisher polished them himself.  He began teaching wax model making at his own private school where he was known as “Obie” to his students.

T/m’s collection contains 65 works in silver and gold by Fisher, including one of his masterpieces, a William III Monteith Bowl after Benjamin Pyne, circa 1699. Measuring just three quarters of an inch in height and 1 3/16 inches in width, the bowl features eight ornate scallops on the rim from which punch cups were hung. The bowl contained water so the cups could be rinsed between wine courses or chilled for cold wine. 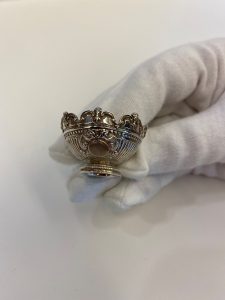 Fisher described his work in 1992 to writer Lillian Wachtel: “With my visors on, I go off into a world of tiny detail that can’t be seen by the naked eye. My vision is narrowed down to just those diminutive areas. It feels like a bit of pleasant escapism, like being in a whole other world.”

T/m continues to compile digital archives for fine-scale artists and welcomes contributions from the public. If you knew Obadiah Fisher and have any biographical information, stories, or photographs you would like to share, please contact us at: info@toyandminiaturemuseum.org. 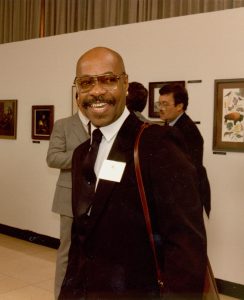 Obadiah Fisher lights up the room at the opening of the exhibit Small Wonders: The Delightful World of Miniatures at the National Geographic Society’s Explorer Hall, 1987. Photograph courtesy of William R. Robertson