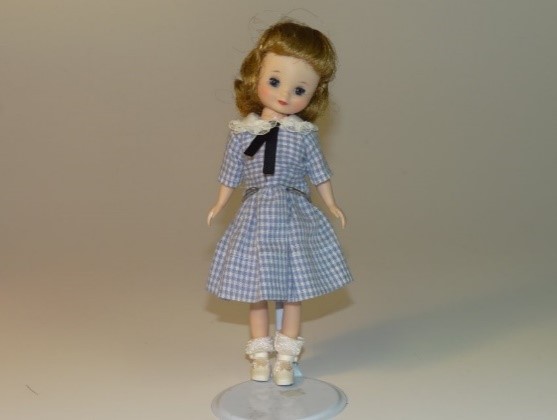 The Long-Lasting Appeal of Betsy McCall

In May of 1951, McCall’s Magazine first introduced Betsy McCall the must-have paper doll of her time, created by staff illustrator Kay Morrisey. Betsy was a middle-class girl who was five-going-on-six, with cream colored skin and peachy cheeks. She lived with her mother, father, and a six-month-old puppy named Nosy in a white house. Each monthly issue of McCall’s Magazine included new Betsy McCall clothing designed to match Betsy’s adventures, including trips to the beach (June 1951), the country (July 1951), and even school (September 1951).

Success came very quickly for the paper doll, and the following year, the Ideal company transformed Betsy into a 14-inch, three-dimensional plastic doll. In 1957, American Character came out with their own version of Betsy McCall, an 8-inch doll that was more poseable than Ideal’s version. They also created friends for her to play with like her cousins, Sandy and Linda McCall. Through the magazine, Betsy shared her life in a way that resonated with her audience: middle-class American girls.

McCall’s Magazine was created by James McCall, a Scottish immigrant who used it as a vehicle to display his dressmaking patterns. The magazine debuted in 1873 as The Queen: Illustrating McCall’s Bazaar Glove-Fitting Patterns. After James McCall’s death in 1894, his widow took over the magazine and changed its name to McCall’s Magazine. She transformed it into a women’s journal that focused on interior design, cooking, and children’s health. Over the years, the publication evolved, along with the women it served. For the first forty years, it primarily focused on dress patterns. Later, it transformed into two separate publications: McCall’s Pattern Book and McCall’s Magazine.

The Betsy McCall paper doll was a clever marketing ploy that built brand loyalty; mothers bought the magazine not only for themselves but for their daughters, too. These daughters would someday be McCall’s customers themselves. Early on, Betsy McCall was mostly shown with her unnamed mother, and they typically wore matching outfits. Their activities centered around home or holiday celebrations. Showing Betsy alongside her mother in matching clothing reinforced the post-World-War II idealization of family and motherhood. The illustrations of Betsy romanticized girlhood and reflected the sense of freedom and triumph in America during the time period.

In 1955, staff illustrator Kay Morrissey was replaced by Renee Forsyth Ludwig. Ginnie Hoffmann became the predominant illustrator for Betsy from 1958 to 1986. Ten years after Betsy’s debut, she began to transition into more of a pre-teen. Betsy was illustrated as a girl of about ten, and she began to speak directly to the readers. As an older girl, Betsy’s world expanded. She sought out new cultural experiences while traveling the globe. She demonstrated respect for foreign traditions, culture, and even taught readers words in other languages (August, 1968). She also became more civic-minded by fundraising for UNICEF (October 1965, October 1966) and hosting a fashion show to benefit the United Nations (October 1963). Betsy’s story lines reflected popular culture. She wore blue jeans long before they became common clothing for American girls (February 1964), modeled fashions for McCall’s own line of dresses (March 1960), and interacted with famous personalities of the day like Captain Kangaroo (November 1957), Roy Rogers (November 1959), and even President Eisenhower (July 1959).

For over 40 years, Betsy was an icon that both reflected American girlhood and served as an admirable role model for young readers. At a time when women and girls were struggling to find equal footing in society, Betsy encouraged girls to envision a future that involved travel, education, careers, and activism.

If you would like to see a library of Betsy McCall paper dolls, visit:

Doll Kind. “Betsy McCall Doll – Out of the Golden Age of Dolls and into our Hearts!)  http://www.dollkind.com/betsy-mccall-doll.shtml (Accessed April 9, 2020).